*******
We are mid-year in the Big Cats. Every day, the children choose their own fun, working and exploring where they desire. There is cheerful "instigation" and coaching from teachers, guiding the children to extend what they have chosen to do, or to try something all new. Our centers are purposefully set up to reflect their interests and our "guided discovery" process from earlier in the school year allows the centers to have ample materials that are both accessible and organized. I have tried to set up a 'laboratory' or 'scientific' environment, a wondering and questioning place …we are constantly working "at" things, trying to figure things out - What can I do with this? How might I do that? What is the problem? What might we do? Why is this broken? How might I fix it? What are some ideas?

Yes, we are mid-year in the Big Cats, and I am so pleased with the kind-hearted and curious work that my preschoolers are drawn to doing. The Big Cats love to work at things, to try. They are happy with the "gray," with things not being perfect or absolute, with trying to make something work. They love exploring.

Paxton was playing in the block center with the ramps and toy cars, and he found a small car with its wheel broken off. He raced over to me, in the art center, and asked to use the science tweezers to pull at the wheel, to see if he could loosen it free from the axle. Dmitry came over to investigate what Paxton was doing. Paxton worked at the car for awhile and then passed it to Dmitry, to see if Dmitry was able to remove the broken wheel.

Dmitry, using the tweezers, trying to pry the wheel loose,
Wow, I almost got it.
That's really hard.
Wow, I strong.
Shew.
Almost…almost…got you off.
Oh boy.
This is.
Off.
Strong.
Oooooh.
I almost got it.
I'm getting tired.

Dmitry passes the car to Paxton.
Paxton takes the tweezers and he, again, tries to pry the wheel loose, explaining,
I think someone should snatch it off.
I'm going to be a helper.
I'm going to do it all the time.
That was a really good hard one for me, Ms. Ingram!
My Dad has some really good tools, Ms. Ingram.
He has even bigger pliers than we do.

Micah walks up and observes -
Want me to try?
I'm really strong!
You can give me a turn.

Paxton -
And I am super strong, too, Micah!
Here, try!

Micah, takes the tweezers and struggles to remove the wheel, emitting groans -
eeeeh yah!
eeeeh yah!
She is really struggling. Luke walks up to see what is going on.

Paxton -
Luke, he can try, too. He's a really good fixer.

Micah gives Luke the car and the tweezers. He begins to work on the car, and Micah cheers him supportively -
Can he? Can he?

Katherine, painting a picture at the same table and observing their hard work, adds a commentary,
Daddy has a thing in the basement that fixes bikes.
But it can't fix cars.

Paxton -
Can it fix trolleys?

Tuesday SOL What do you have to show for it?


This is a Tuesday "Slice of Life" for Two Writing Teachers. Check out their website for lots more reflections on teaching.

*******
Engineering with my preschoolers.

Let me share about one excited preschooler - I'll call her Laurel.
Laurel loves to create.
She rushed over to the table to be one of my first engineers.
I handed the small group blue paper to draw their 'blueprints', designing what they wanted to build. Laurel declared, as she drew, "I'm making a ball. No, I'm making a monster. Yes, I'm making a monster." 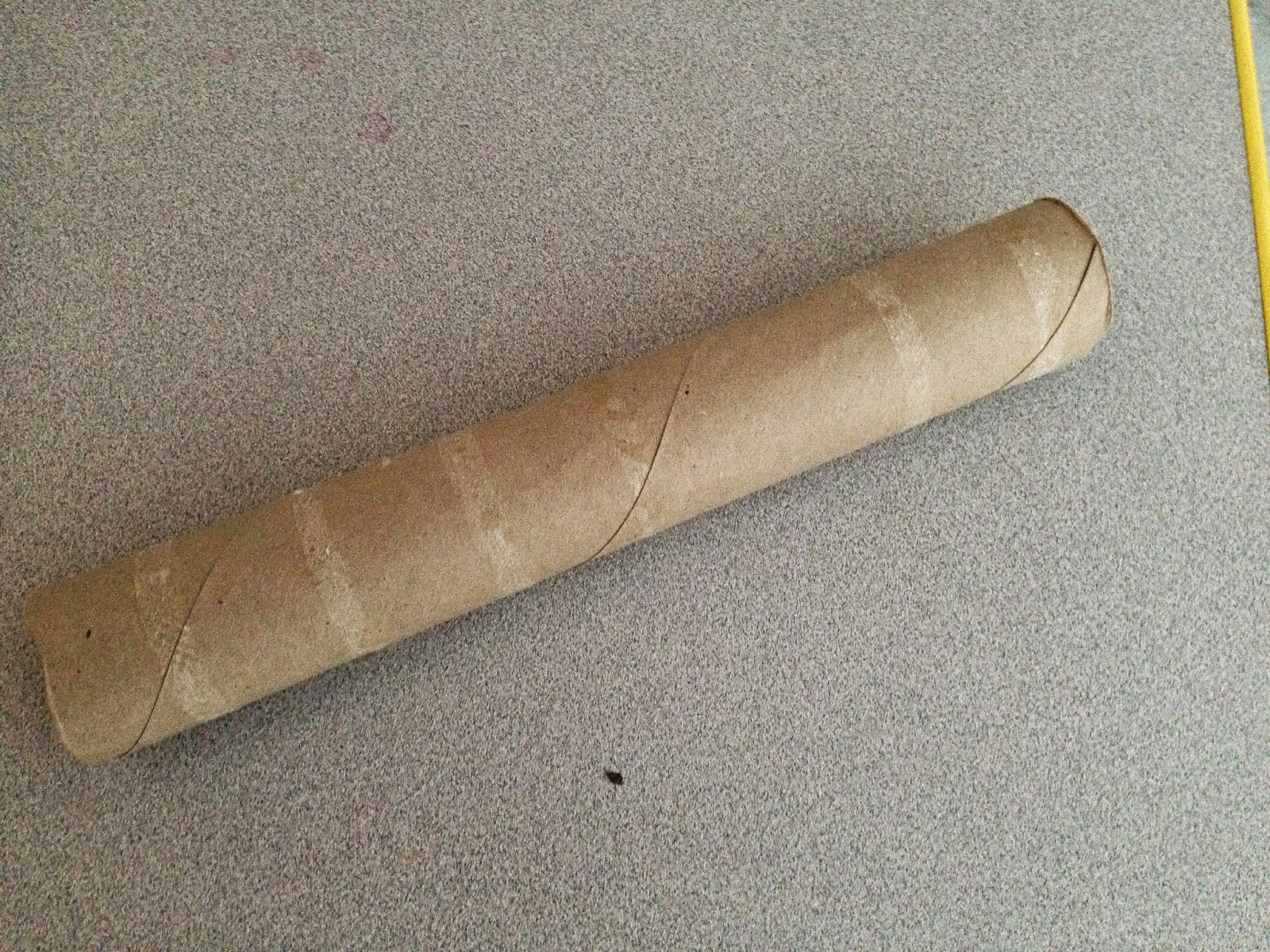 What she needed was tape - lots of tape, lots of different colors of tape. She worked tirelessly, using red tape, black tape, pink tape, yellow tape. She covered the paper towel roll with tape. "Yellow is my favorite!" she declared, wrapping this fourth color around and around the roll.

What next captivated Laurel's interest was all the found objects - especially, the jar of blue items. There were many, many small blue foam 'snowflakes' and she needed these in the monster. She picked up a few and put them inside the roll, only to find out - immediately - that what went inside the top of the paper towel roll fell out of the bottom.

"It comes out here!" she exclaimed, irritated.

Me - "What might you use to stop it from doing that?"

"Oh. A snowflake. Yes, a snowflake. I'm going to put it on the bottom. To stop it." She chose one of the foam snowflakes as the base [it measured almost exactly!], securing it with more colored tape. This took some doing. She asked for my help holding the small snowflake, while she cut the tape.

[From an adult perspective, this might seem so insignificant - working with a paper towel roll, adding tape, trying to close or block the base opening…however, consider for a moment the hard work of this task for a three year old, cutting and manipulating the tape, without it getting all twisted, while working with the round edges of the paper towel roll.]

Laurel persisted and finally covered the bottom successfully. She tested the new base by throwing in a snowflake. Then another. Then she added in lots more found objects from the jar. Many many snowflakes and … "Oh, look a key! He needs a key!"
I try to figure out what she's thinking about, to see what is her purpose…I ask, "Why are you putting those inside? Is the monster taking those things?"
She doesn't answer me; she is too busy searching for objects to put into this paper towel roll. Finally, when it is full to the brim, she declares, "Now I need to cover the top."

"Let me show you," she declares, and she tears off the tape at both ends and shakes the paper towel roll.  "See these! Look!" Many found objects fall out.

Laurel notices a few things still in the roll; "Oh, it is stuck." The next thing I know, she is unwinding all the tape from the outside of the roll, undoing the taped base, deconstructing the whole thing. Within seconds, we are back to:

A blank paper towel roll.
Laurel sets it down on the table and scampers off to play dress up.

Thank goodness I sat and chatted with her while she worked (and took notes)…otherwise, I wouldn't have realized Laurel had created anything!


*********
The following photos are not "Laurel," however, they illustrate the work involved in working with tape and cardboard recyclables when you are only a preschooler. Enjoy! 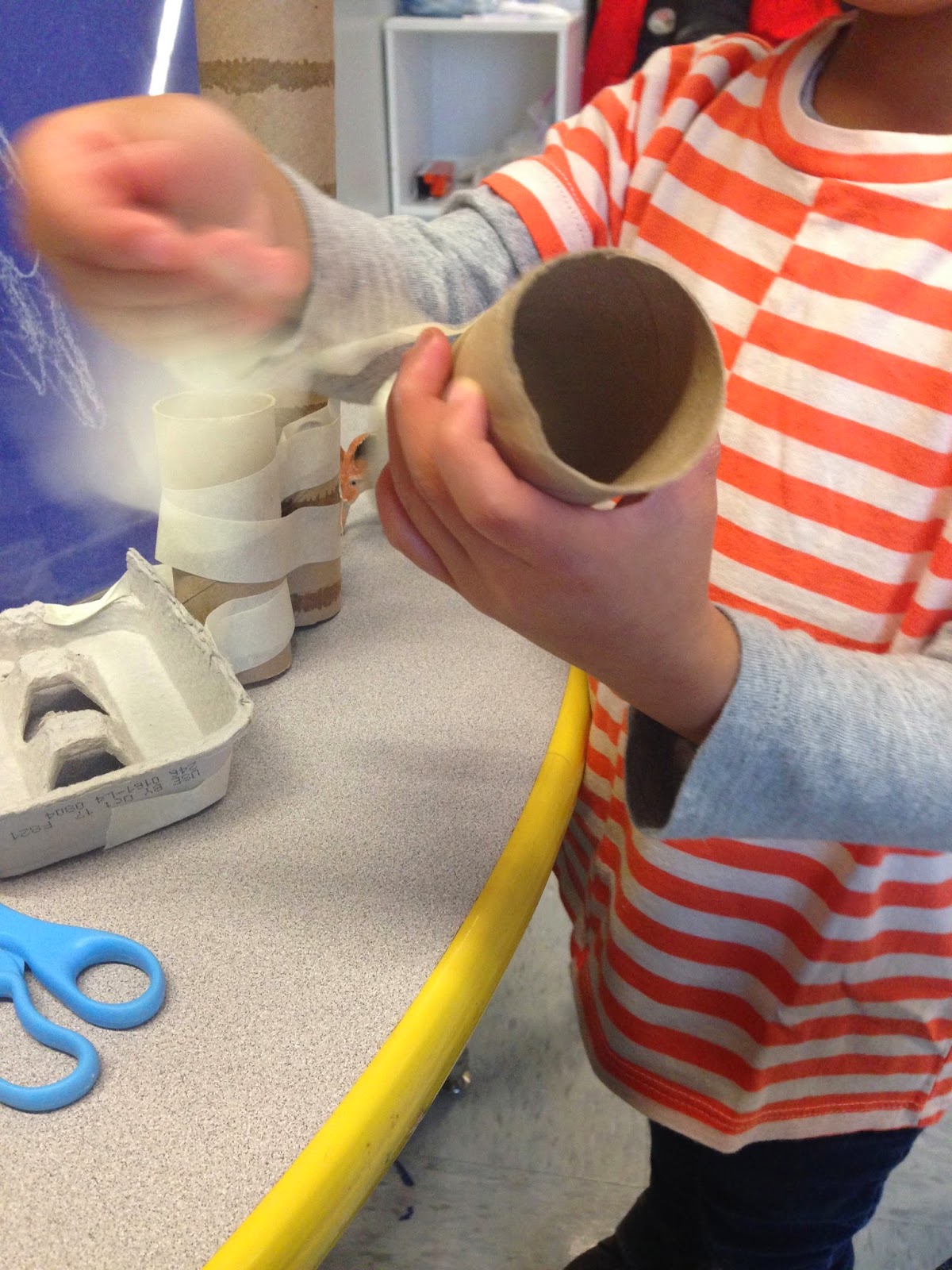 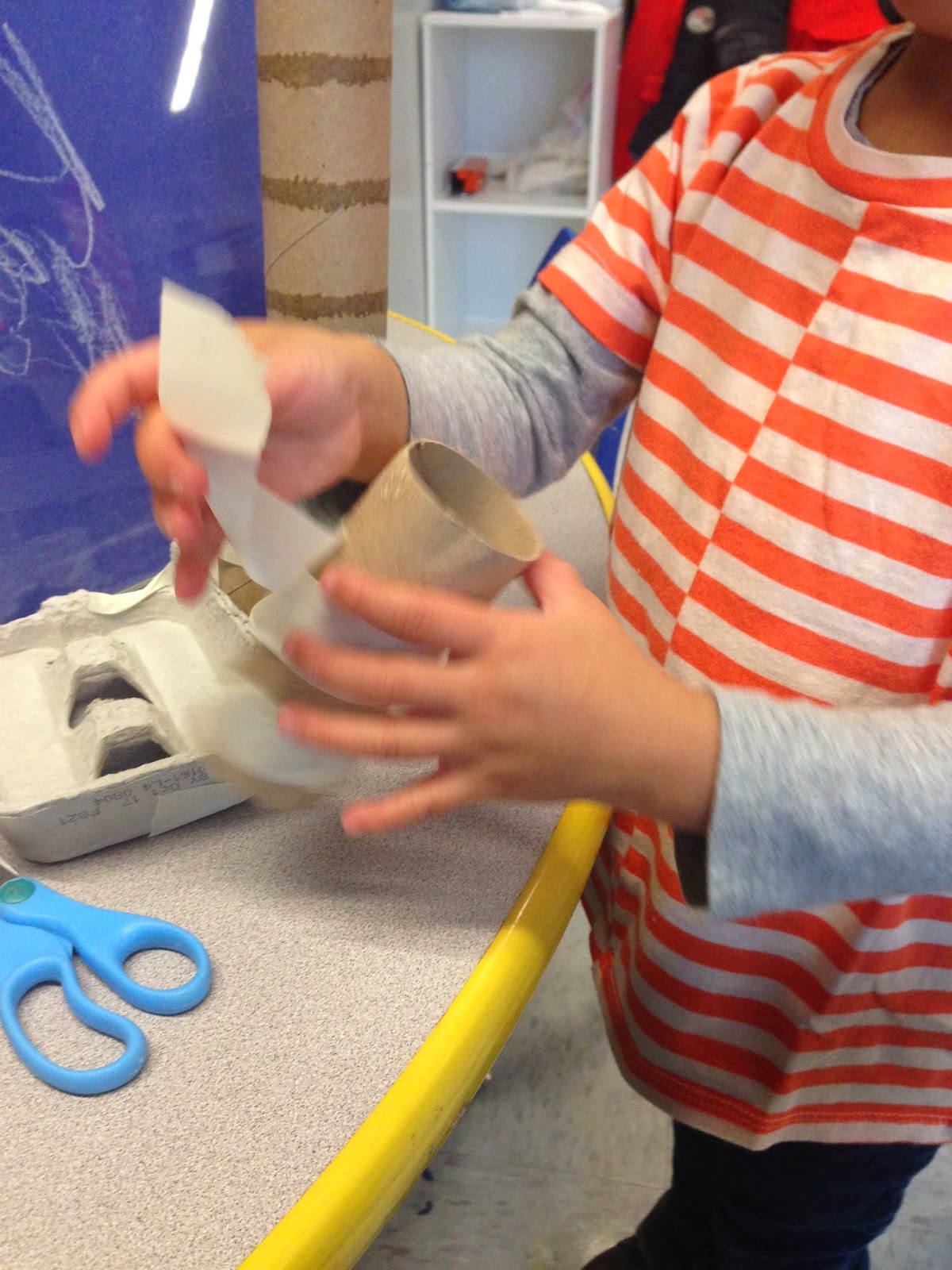 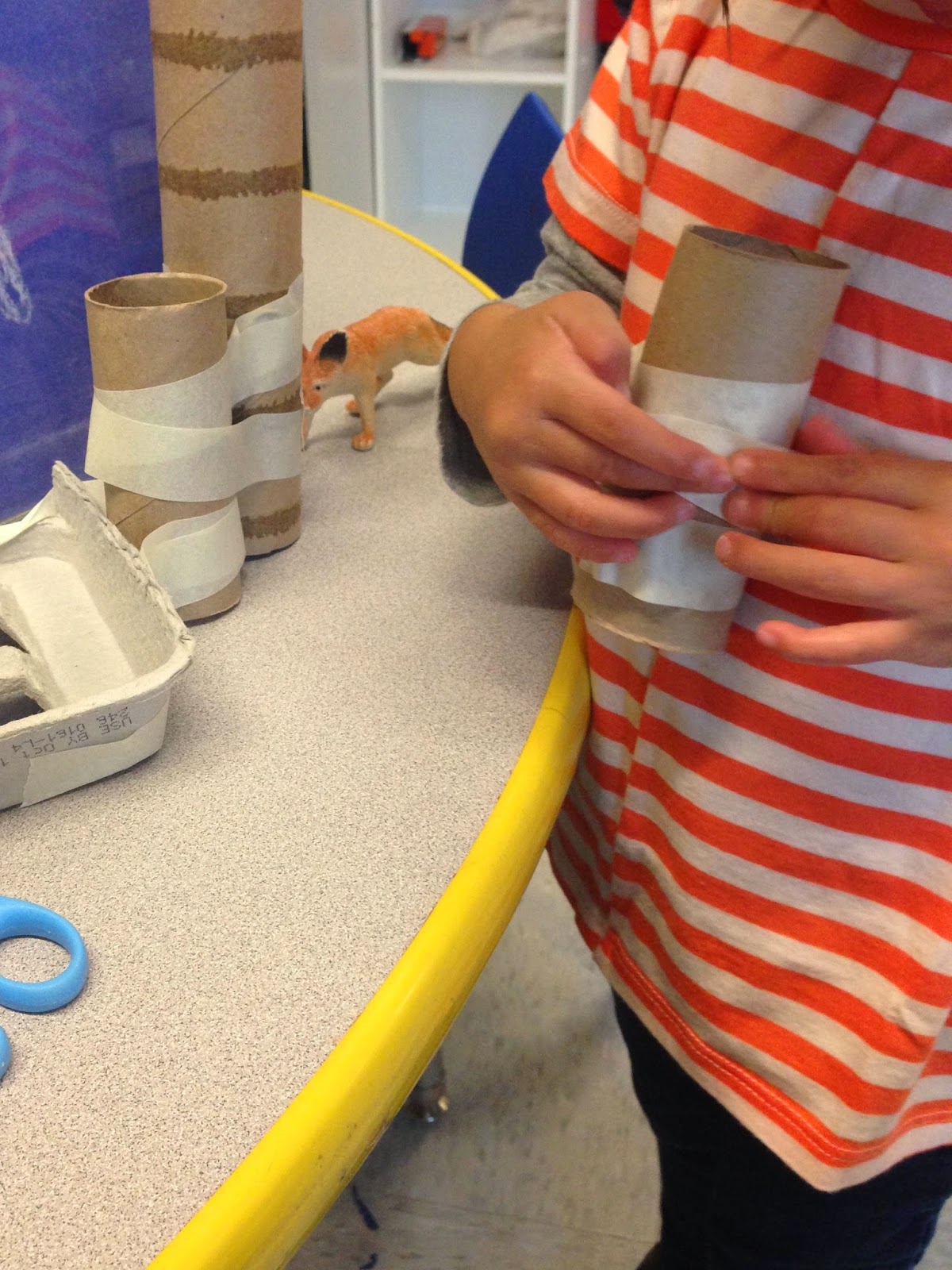 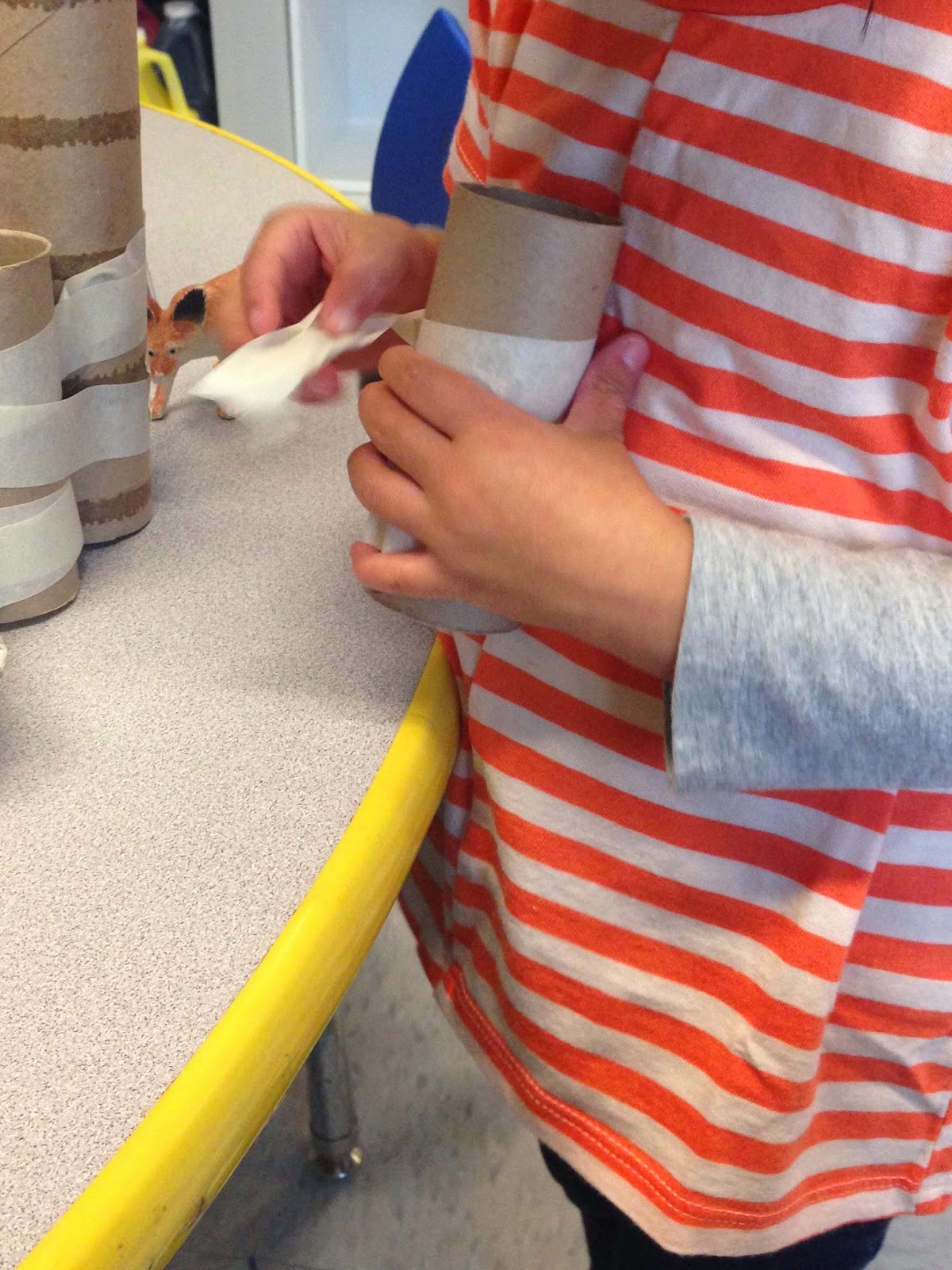 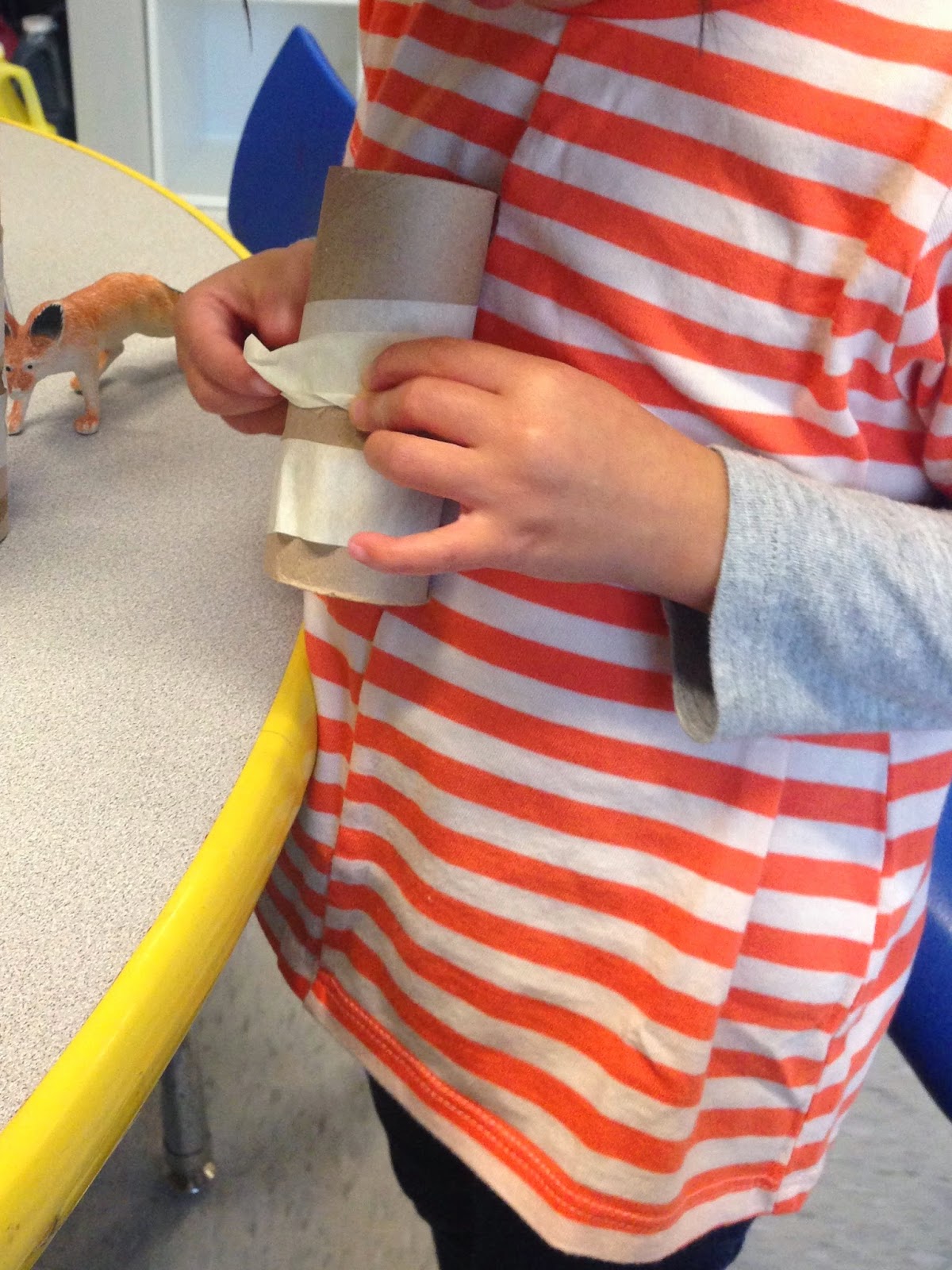 Tuesday SOL What about snow?

*******
Happy New Year!
Today was our second day back at school and, much to my surprise when I woke up this morning, it was snowing! I had heard that we might get a dusting, but unfortunately this 'dusting' came during the morning commute…I struggled to get in to my classroom, my typical 30 minute commute tripling in length.

That slog of a commute gave me so much time to watch the falling snow and plan a snowy extension to today's learning. I always find nature so engaging for children - and isn't it particularly magical when nature is a fresh snow?

After gathering, I took a small group of children outside when it was still snowing, to collect fresh snow for our classroom. We had so much fun! 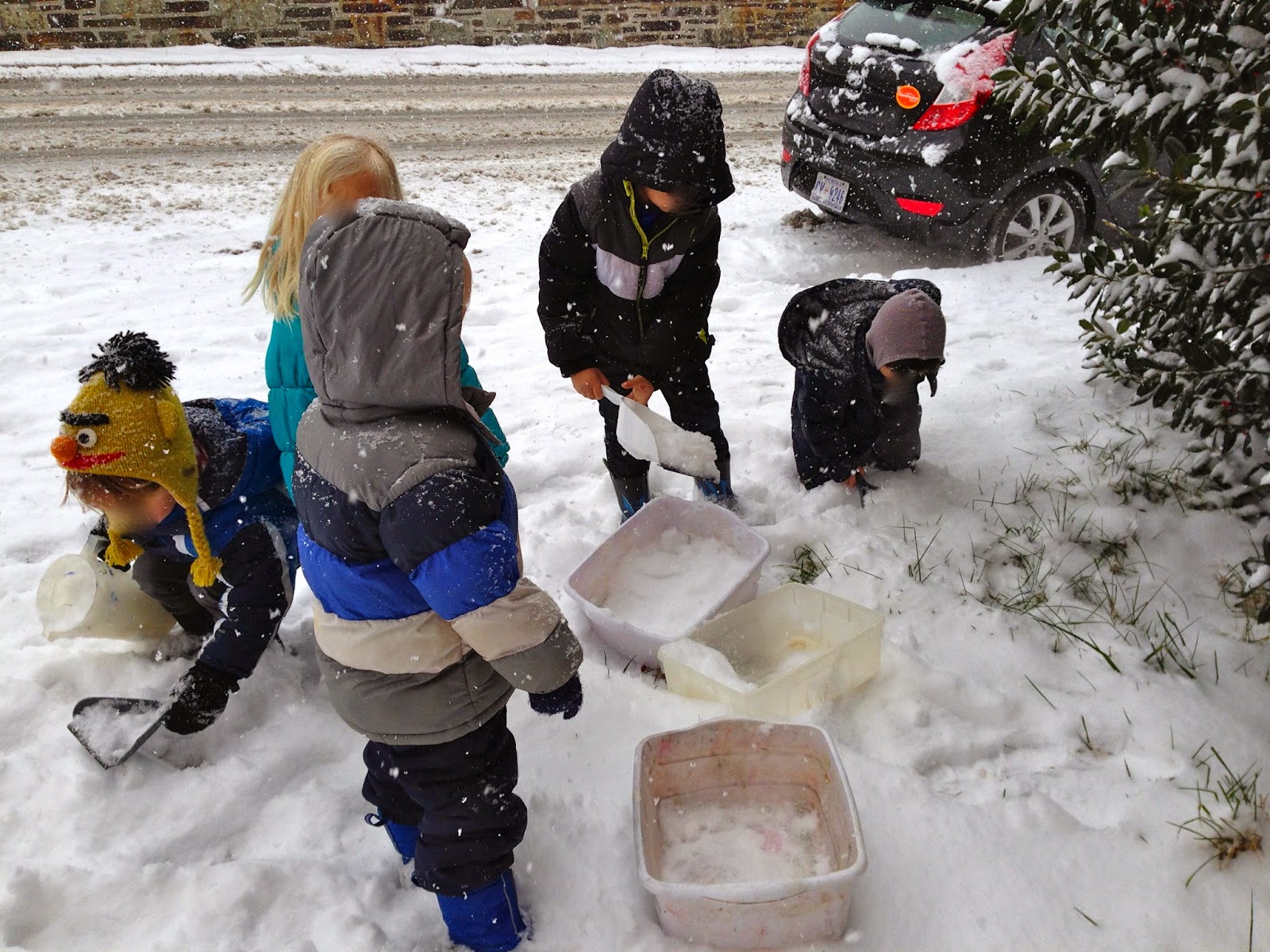 Back in the classroom, one large tub of snow was dumped onto the sand in the sensory table - snow on a beach! The children were surprised and elated by this combination…making snowballs, trying to build a snow man, watching the sand and snow mix together, surprised by how cold the sand became.


Snow in sand. It was so cold, it started melting... you can make an outside snowball
(Evan)

There were still three more large containers of snow…and these I added to the art table. The art table had been readied for a process art activity with found objects and paint. What if we used the paint and the found objects with snow? Why not? What might happen? Let's see! 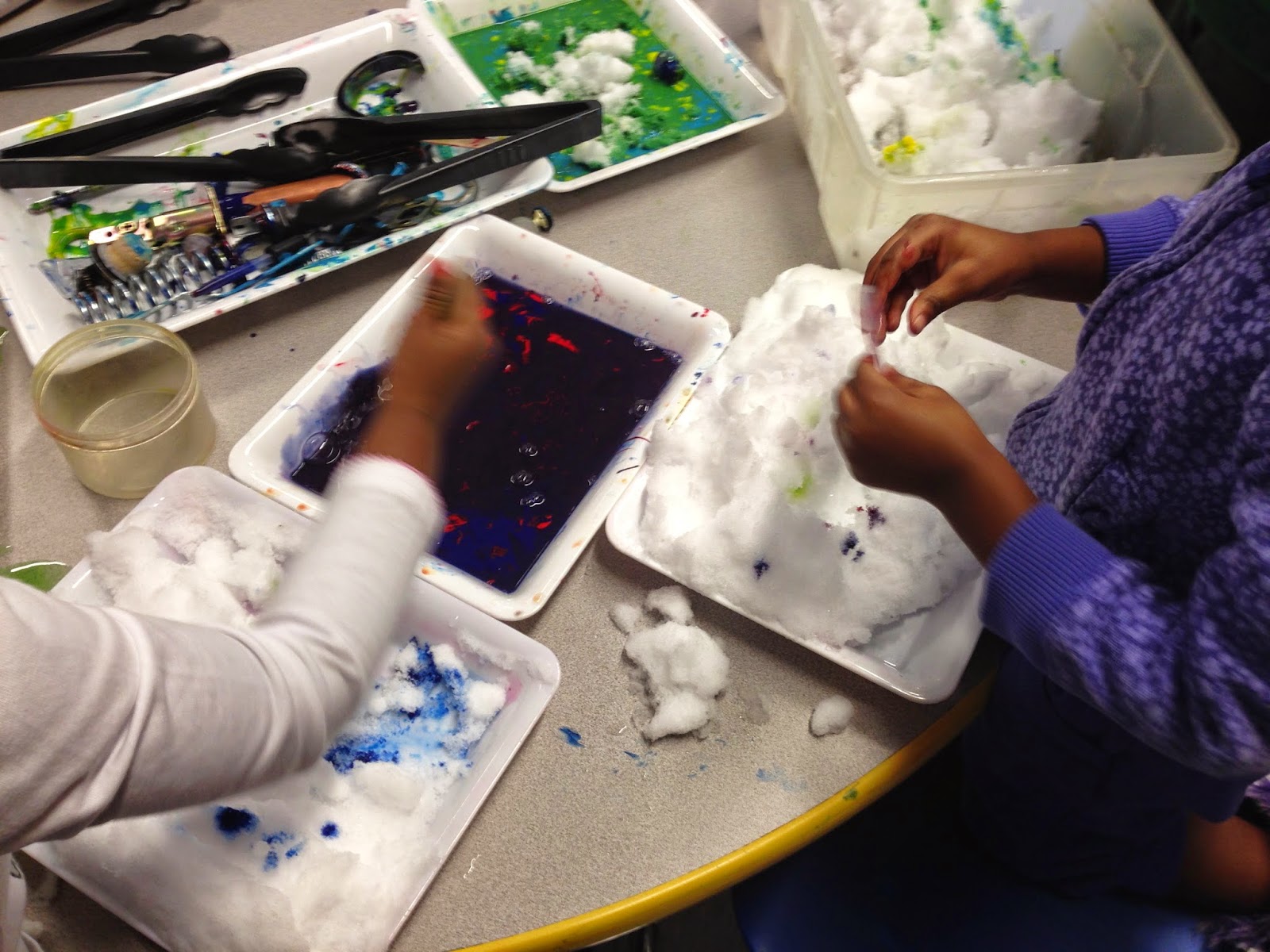 I added a few extra tools - tongs, eyedroppers, tweezers, stirring sticks, spoons. I watered down the paint so that it might be useful with a dropper. Then I stepped back and watched the children explore...

touching and squeezing the snow
filling eye droppers with paint, squeezing paint onto the snow
making dots, speckles on the snow
adding spoonfuls of snow into the paint
picking up snow with tongs
I love pink
I love purple
I love blue 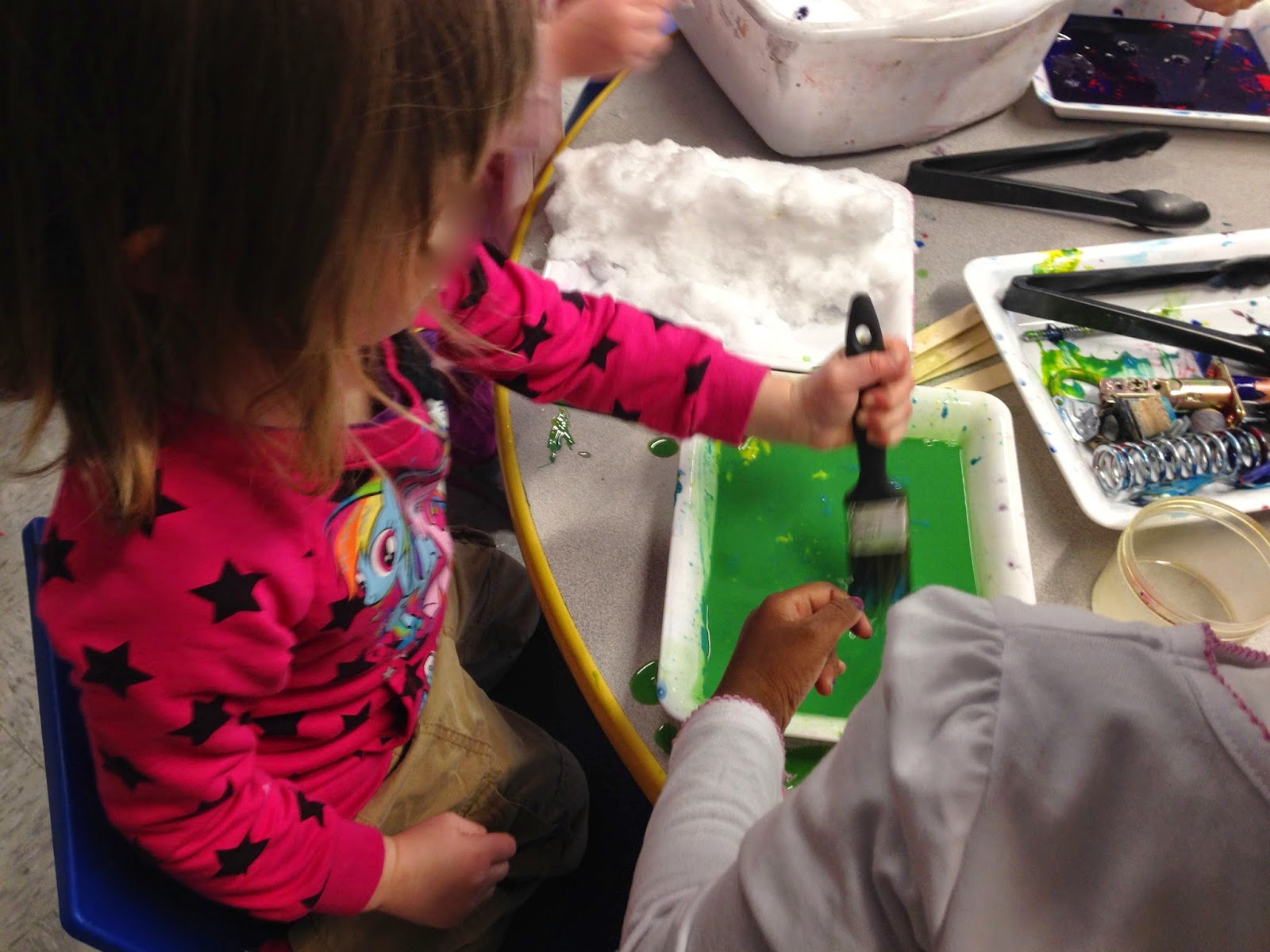 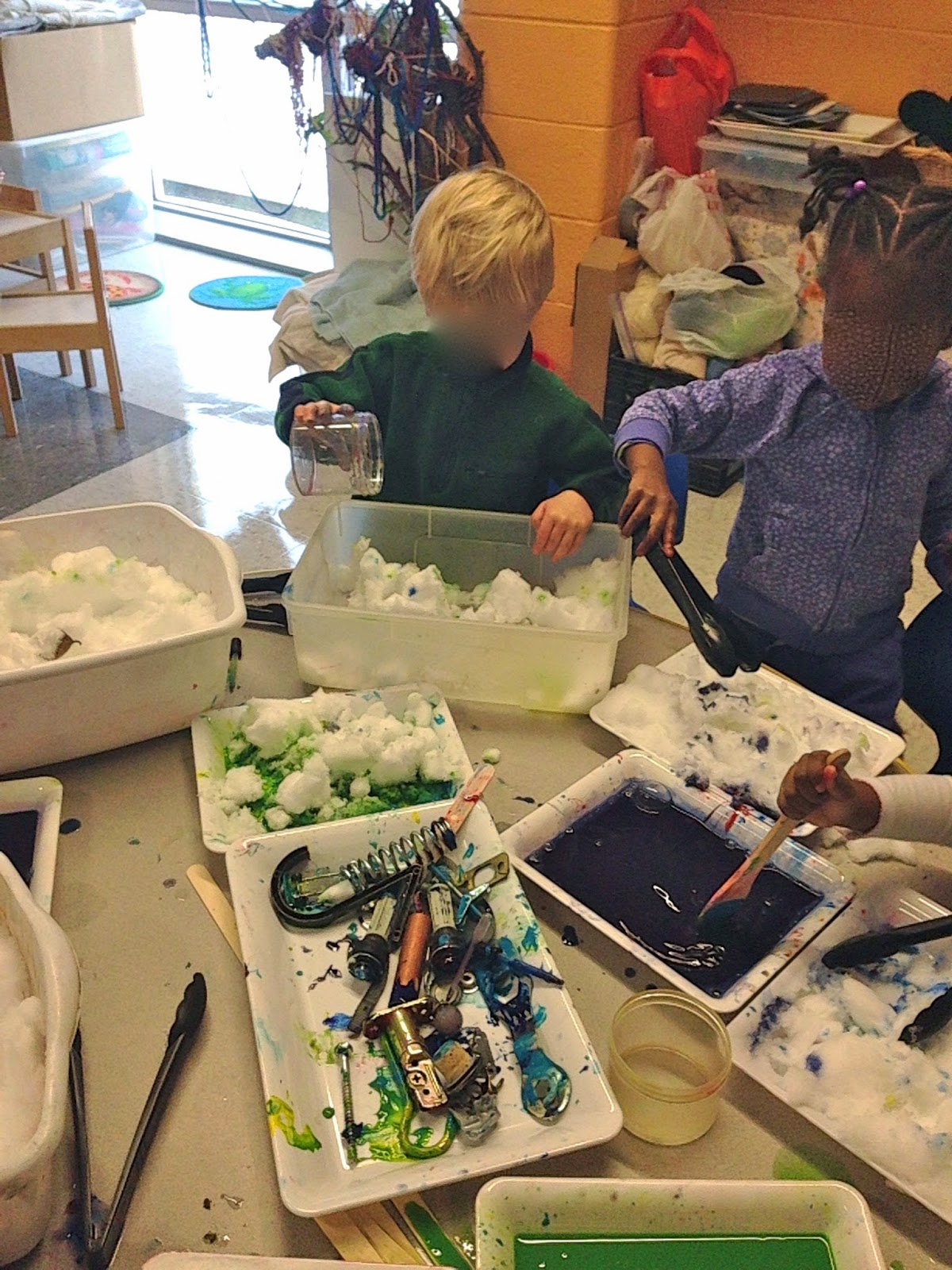 picking up tongs full of snow,
plopping the snow into the paint,
watching, watching, watching
as the paint moved up the snow ball,
the snow slowly filling with paint color
not melting but growing in color,
Stirring, stirring, stirring
meticulously removing every bit of snow from the containers
We are making snow!
It's turning to dark red
My snow is all pink
This is cold 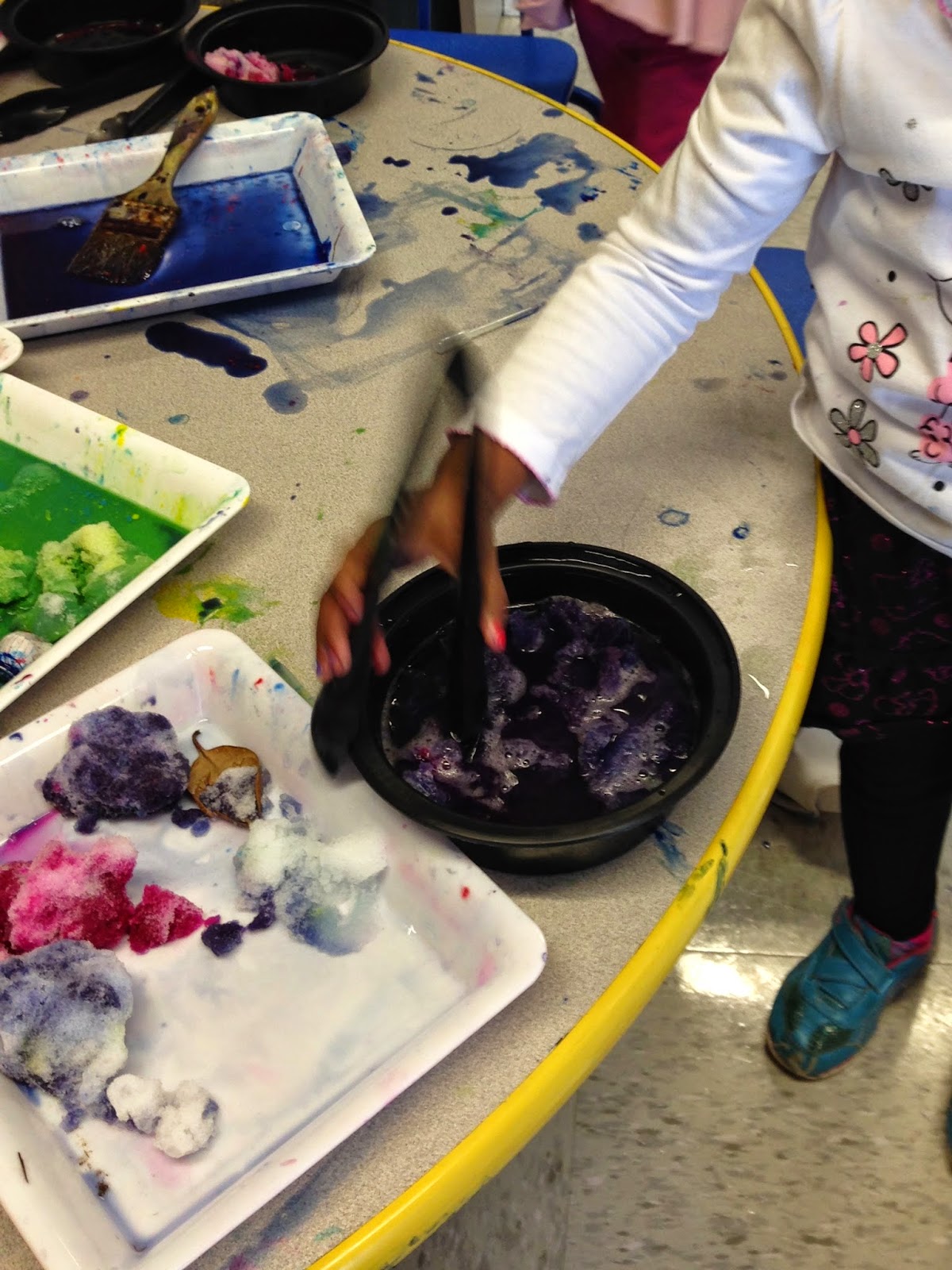 Feverish preschoolers,
rapid questions, incessant demands
I need tongs!
What about tweezers?
I need another tray!
I need more water!
I need a clean squeeze thing!
I want pink, too!
What are those?
I need something to mix!
Where did you get that?
I need a spoon! 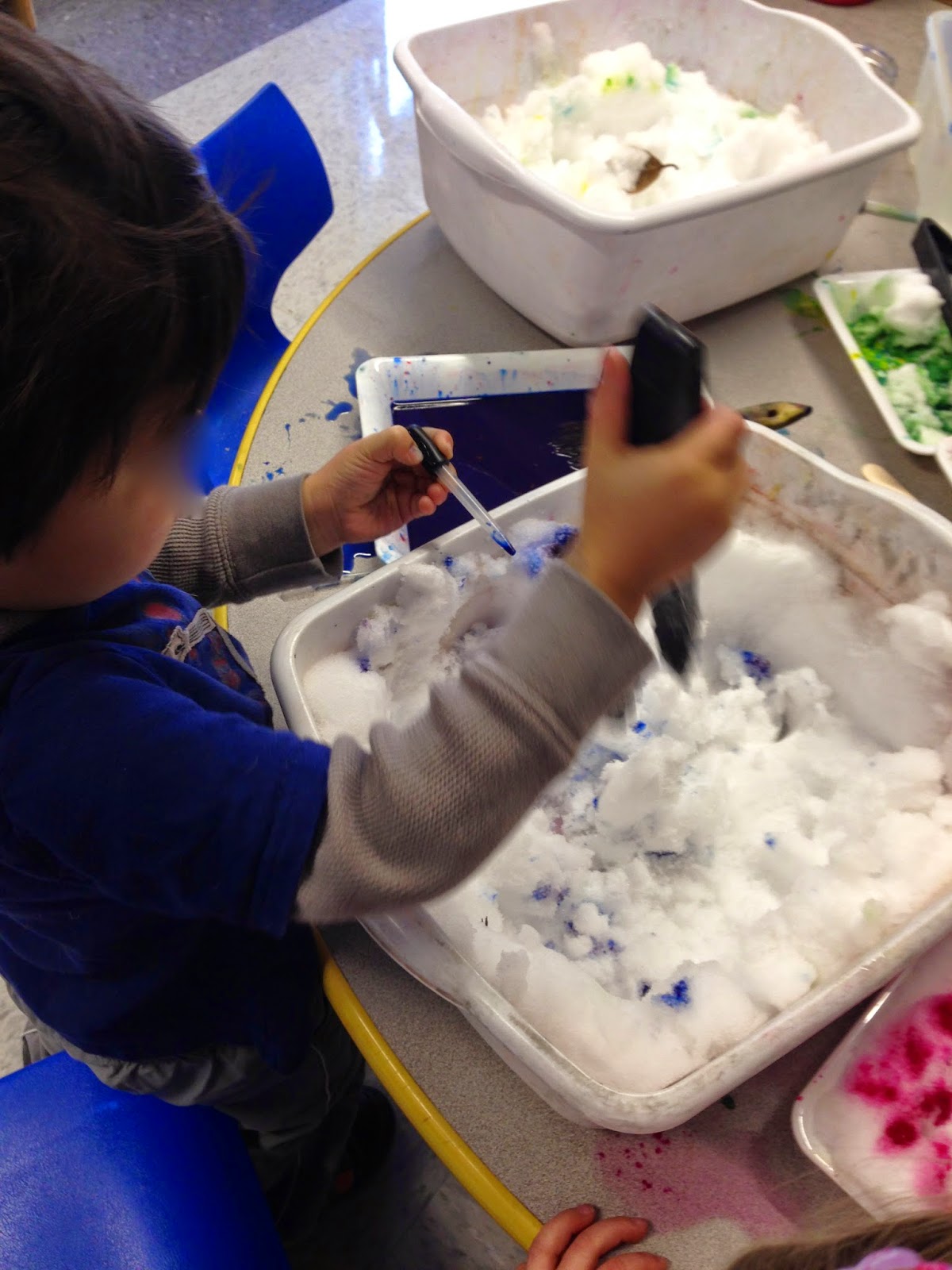 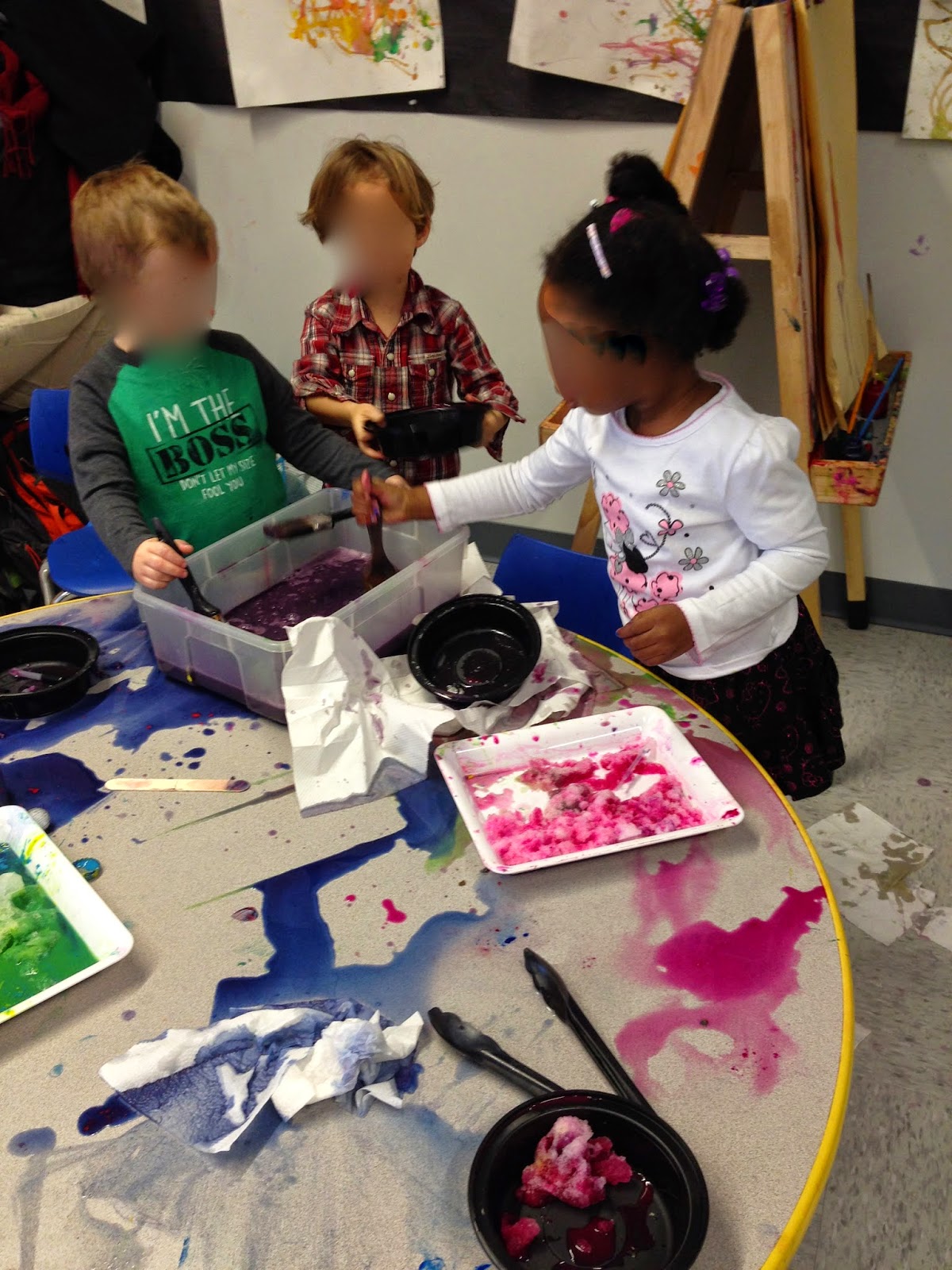 Me,
I was the guide on the side,
moving quickly to support them,
all things at once,

taking pictures,
making notes,
asking questions,
pointing them towards supplies,
encouraging them to resolve problems themselves
Where are they kept?
Has anyone seen where those are kept?
Where did we put them?
What just happened when you did that?! Wow!
What if you ask a friend where she got hers?
How might you get the paint out of the eyedropper?
What happens to the snow when you do that?
Did you ask her if you can have some?
Where might we get water?
Will that fit in there?
What happens to the paint when you put snow in it?
What do you think will happen?

I, too, was alert, excited, restless, engaged.

This is my favorite kind of centers work!

And it sure helped me to forget about that horrid commute.

Labels: creativity, emergent curriculum, exploration, imagination, materials, process art, science, snow, teaching, wonder
Newer Posts Older Posts Home
Subscribe to: Posts (Atom)
I see this blog as a dwelling place for my enthusiasm about "all things early childhood." I taught preschool for 20 years and loved it. In 2020, I stepped away from full-time teaching, and I am now focused on being a grandmother and a writer. I continue to advocate for early childhood, especially for classrooms filled with joy, curiosity, and social justice.