What about those sharing boxes?

My threes love circle time when we have the Animal Sharing Box.


Next is Kate, holding her box on her lap, starting to take the cover off and show the animal to the class.
Me to Kate, "Let's wait, honey, hold on, keep the lid on your box, let's see if your friends can guess. Does anyone have a question that we can ask Kate about her animal?"
Gwen, "Is it purple?"
Kate, "No, it's a horse."
Teagan, "Is it a cat?"
Kate, "No, it's a horse."
Me to class, laughing, "Friends, please, think about an animal and let's ask what SOUND it makes...."
Sara, "Is it a mouse?"
Kate, loudly, "No, it's a HORSE! See!" and then she opens the lid to show us!

What is it about Rapunzel? 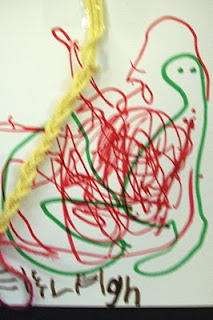 I love using fairy tales and folktales to deliver important messages about friendship and appropriate behavior. I always "ham it up" in my reading/retelling, and ask lots of questions. Take for example, The Princess and the Pea - this presents a perfect opportunity to discuss whether it is a good idea for the guest to "whine" ("Oh, that bed was so lumpy! I didn't sleep a wink all night!"). Then there's The Three Billy Goats Gruff - what about that Troll? Was he a kind guy? Did he own that bridge? Should he hurt others? Was that behavior "thumbs up" or "thumbs down"? Oh, and Goldilocks - excuse me, but did she knock on the door? Did she remember to first get the attention of those bears? Did she have any right to just walk in?


This year, the story of Rapunzel won everyone's heart. I read to them the original story from Armand Eisen's A Treasury of Children's Literature. I read the story slowly and dramatically, pausing to ask my questions - Should that witch have taken that little girl and made her live in the tower? Was this the right thing to do? And, somewhat protectively, I added, Is this story real? Is it a true story or pretend? Are there witches? Then, I retold the story using the spoof (or what is often called "a fractured fairy tale") Falling for Rapunzel by Leah Wilcox. At circle, I unveiled a long three part rope for us to braid together...three children at a time, each holding an end of the "hair," and me at the opposite end, holding the tied-together part. We practiced motion terms - moving under, over, to the side, in the middle, to the right, to the left. It was rather hard for these 3s, but they were focused - fascinated to see a braided rope appear. (An unexpected hit was my simple follow-up project, to make their own individual Rapunzel picture - braiding her hair, trying to draw her. Much to my surprise, all the children worked on this, trying to create the braid. A fun way to build fine motor skills.)

During freeplay that day (and over the next several days, as well) I learned what a hold this story had on the children. Using the blocks, they built a (short) tower for Rapunzel to live. Then their retelling and dramatization of the tale began. In the children's version, the witch is very kind and motherly. She visits Rapunzel frequently, bringing treats. There's no need for only one prince and one Rapunzel - one day, two princes appeared on the scene and they called out for five Rapunzels. In the children's version, the mother witch welcomes the princes. They work together to defeat a common enemy - imaginary dragons. But then, some children decide to be the dragons and it is decided that all will live peacefully together - mother witch, princes, Rapunzels, many, many babies, and even the dragons, because the dragons protect the castle. The tower blocks are frequently turned into a dance floor and a fabulous dancing ball is held.

I am fascinated how children seem to know instinctively how to make things better. They are fascinated by good versus evil, they long to hear about witches, monsters, bad guys, and trolls, but their goal is clear - peace and harmony will reign. This is a true happily ever after tale.
Posted by Maureen at 9:11 PM 4 comments:

I Love My Mommy

I love my mommy because I love her hair.

I love my mommy because she gives me presents.
She gives me all the stuff I like and I like her ponytails.
She makes me hot chocolate and she gave me a pig, oink! oink!
She gave me a new necklace and she is very nice.
She is special and she sometimes buys me special things and we do projects together.

I love my mommy because I do!

Posted by Maureen at 4:35 PM No comments:

Maureen
I see this blog as a dwelling place for my enthusiasm about "all things early childhood." I teach 3 year olds and I love it. I enjoy exploring why I do things a certain way - the "theory" behind the "practice." I'd love for this blog to be a soft place for teachers, parents, and caregivers to land, to consider a variety of educational topics, and perhaps help us understand little ones a little better.